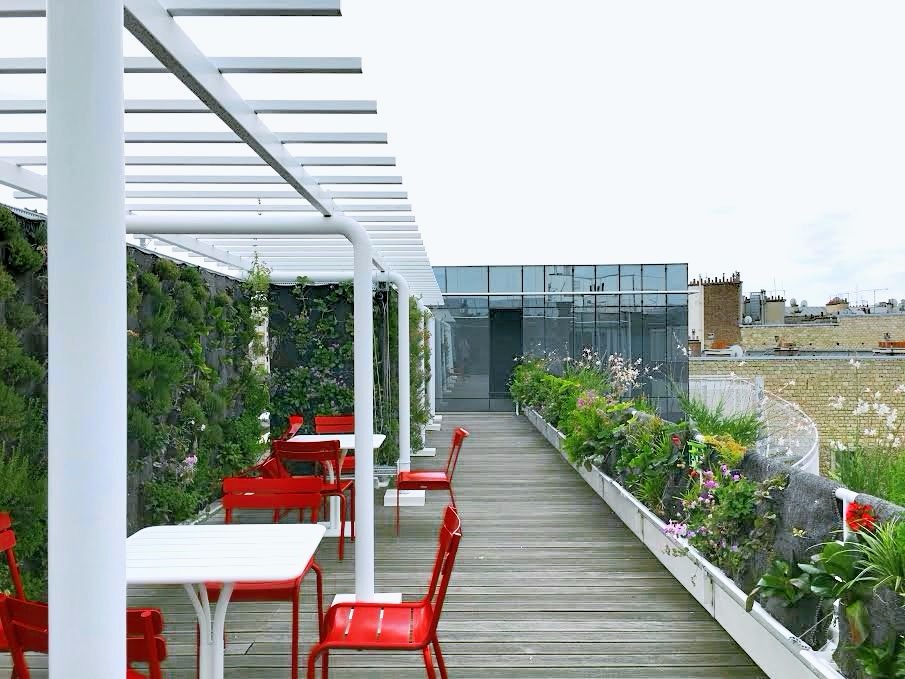 7Garden Opens on the Roof of Unibail-Rodamco’s HQs

Sous les Fraises and Unibail-Rodamco Introduce the Innovative Urban Farm “7Garden”… on the Roof of the Group’s HQs!

Unibail-Rodamco, the first listed real estate company in Europe, just announced the inauguration of a rooftop farm in its headquarters in Paris, made available for all its coworkers. It is the first step of an already successful collaboration between the company and a startup accelerated during the second season of UR Link, Sous les Fraises, a pioneer company specialised in organic food production in urban areas.

Since Monday May 22th, Unibail-Rodamco coworkers can enjoy an out of the ordinary environment: the 7Garden, a terrace located on the 9th and last floor of the Group’s headquarters, in the 16th arrondissement of Paris.

A haven of peace in an unique setting

7Garden is an urban farming space in the heart of the French capital, entirely built by Sous les Fraises, a startup from UR Link Season 2, Unibail-Rodamco’s business accelerator. Green walls separate flexible spaces. The production of the vertical urban farm includes more than 20 species of productive plants – such as strawberries, tomatoes, mint, basil and so on – which are used by Unibail-Rodamco’s chef.

7Garden is a haven of peace made available for the Group’s coworkers and built to help them focus in a quiet environment, on top of the roofs of Paris. The space can also host special events such as team breakfasts and cocktails.

A holistic approach in compliance with Unibail-Rodamco’s vision

Sous les Fraises brings its knowledge to the entire value chain and delivers turnkey urban farms. First of all, their team analyses the resources of the space they are working on – in our case, the roof of the Group’s headquarters, before evaluating its potential. Then, the team places vertical structures and plants to build the complex ecosystem of the urban farm.

During the second season of UR Link, the Group was seduced by the expertise Sous les Fraises and its founders: Yohan Hubert, a biologist, and Laure-Line Jacquier, an architect. Today, the team counts 15 people, and continuously explores new solutions to address urban constraints, by bringing agronomists, chefs, architects, urbanists and city-dwellers together.

Sous les Fraises produces fruits and vegetables in a closed circuit : water is collected and filtered from rain and from the building, and irrigated the plants. This circular economy approach is in line with Unibail-Rodamco’s CSR Strategy Better Places 2030. The 7Garden is an illustration of how to reconquer empty urban spaces and establish a better connection between nature and urbanism. This unique space acts like a green cocoon in an urban landscape, bringing nature in empty areas, in offices and cities.

The opening of the 7Garden is the opportunity for Unibail-Rodamco to illustrate the importance of working environment on professional life. The Group developed some of the most emblematic offices such as the Majunga Tower in the Paris region and is actively building the New Art of Working of tomorrow’s workspaces

Wellbeing at work is at the centre of the company’s concerns, with a focus on a multi-sensory experiences. The idea is to multiply spaces such as 7Garden: open, green, comfortable for coworkers, and quiet.

The Sous les Fraises project on the roof of the Group’s headquarters illustrates the revolution of workspaces: open to the outside world, they are now part of a global urban project where nature is brought back into cities.

Collaboration between Unibail-Rodamco and the startup hasn’t come to an end yet: another project is already in development. In a few months, the Group is to inaugurate the first urban farm on the roof of a shopping centre: So Farm, on the roof of So Ouest in Levallois-Perret.

In the meantime, UR coworkers can already enjoy a piece of countryside in the city… and, whenever they want, they can get to the 9th floor, and take a breath of fresh air on top of the roofs of Paris.